I had the following in my sources.list file:

Based on the example sources.list entry at the Debian Wiki:

But this got me the following warning:


E: The repository 'http://ftp.uk.debian.org/debian-security buster/updates Release' does not have a Release file.
N: Updating from such a repository can't be done securely, and is therefore disabled by default.
N: See apt-secure(8) manpage for repository creation and user configuration details

I changed the line to the following after reading a post at Stack Exchange (changing stretch for buster):

Which worked -  Thanks Stephen Kitt.

Stephen's source link however goes to the security information page at debian.org which has the following example:

I admit to being a bit confused. But I am also tired and my brain isn't working - it's end of term and I have young children.

So I am just going to post this and hope that either somebody will clear up the mystery or I can come back to it later when my brain is working and clear it up.
Posted by FreewheelinFrank at 12:28 PM No comments: Links to this post

Ten years ago I destroyed my last Windows installation (by accident) while installing a Linux distribution. I had been dual-booting Linux for a couple of years before that, and had been using Linux exclusively on my older laptop for sometime. No big regret (Except for Half Life).

So, for ten years, I and my spouse and my children have all been using Linux quite happily (or perhaps it might be fairer to say obliviously for most members of the family).

Well, first of all, because of Firefox. When I first got online at home in about 2003, Internet Explorer was dreadful. A quick history lesson:


[Microsoft] missed the world wide web and then set out to exterminate the one company – Netscape – that hadn’t.

In the 1980s and 1990s, it wielded its monopoly power ruthlessly and effectively. It wilfully destroyed the most creative startup of the early web.

Firefox (originally named Phoenix) arose from the ashes of Netscape. It was something new to me - open source software - and it was good. It worked well, it was secure, it looked good, it encouraged open standards and the development of the web, and it was free (as in beer)!

At that time I was using a lot of software gleaned from free CDs which came with computer magazines, installation CDs borrowed from other people, and downloaded freeware programs.

I time went on, I became aware of open source alternatives and started using them. The Gimp replaced the ancient version of Photoshop, Open Office replaced the outdated Microsoft Office program, and Amarok replaced Winamp.

Making the leap to an open source operating system was a obvious next step.

As well as being "free as in beer", open source software is also "free as in freedom" - when you can see the source, you can make any change to it that you want which appealed to me. And of course, the software is only free in price because it is a collaborative exercise, made possible by the freedom to see and alter the code.

I'm not a computer programmer, so I haven't contributed to open source software by writing code. I've dabbled in customising themes for various programs, and enjoyed customising the desktop in Gnome, XFCE and OpenBox. And I've tried to help other people use Linux with this blog, so I hope I'm not a complete freeloader.

The choice in software in Linux is huge, and the possibilities of customisation are limited only by your interest and coding ability.

A second reason is that Windows, for me at least, is not as good as Linux.

The original XP which came on my Internet connected laptop was dreadful (I'd had a previous laptop which ran CP/M, the operating system which Microsoft ripped off to make MSDOS, but that's another story.) OK, SP2 was a lot better and SP3 was good, but it still took about ten minutes to shutdown, presumably because of registry cruft.

By that time, I'd jumped ship.

I have used or worked on or administered Windows computers since then and Vista was dreadful, 7 was pretty good, 8 was awful and 10 is OK, apart from the updates nightmare. My newest computers came with Windows 10, but I was never tempted to keep it.

For me (and the family - nothing stress tests a computer better than children), Debian 9 has been 100% reliable for the last couple of years. My younger daughter managed to induce a kernel panic in Debian 8 from time to time with random keystrokes (she was only 2!), but my eldest daughter has been using Linux since age one without issue or complaint - and she uses Windows at school, so it's not as if she has nothing to compare it to.

Another reason to run Linux has been that it works better on bottom-end computers which often struggle to run windows, even though they come with it installed. Fr example, both this laptop and the family all in one computer are definitely not high powered machines. Purchaser reviews for both machines often complained that they were slow, but both are quite happy running Debian.

As I mentioned, Windows 10 isn't too bad, but the updates issues are not something I would no like to face myself- updates installing at inappropriate times, failing to install, getting stuck, and the endless enigmatic messages. 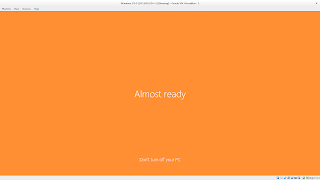 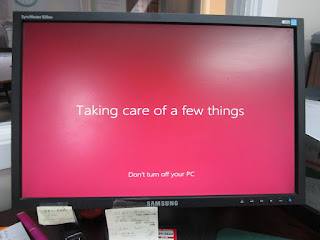 Updates in Linux have always been quick and easy. No endless downloads or forced reboots, and if you really want to know what is going on, you can read the terminal output. A lot of the problems with Windows 10 update seem to be with feature updates these days, and it's fair to say that a Linux upgrade requires some technical knowledge, but it's not really that difficult. (Here's a how-to for Debian from Make Tech Easier.) If that puts you off, remember that most Windows 10 users are running a feature update from over a year ago, because they are either unwilling or unable to update. (BetaNews, Slashdot).

And of course, security in Linux is less of a concern. In Windows I was always trying out different anti-virus and firewall programs, whereas I don't use an anti-virus program in Linux. I have tried out some of the Linux ones, but now just don't find one necessary on the home desktop. The update process itself makes Linux more secure, since it updates almost everything on the system. You don't have Internet-facing applications or hardware drivers that don't get updated unless you check with their third-party authors or run a vulnerability checking scan tool.

Hence the fact that the emphasis of this blog has changed over the years. In fact, I notice it has been almost 10 years that I have been writing this blog, as well as using Linux!

Perhaps it might be time for a name change?
Posted by FreewheelinFrank at 10:21 AM No comments: Links to this post

I have previously used command line tools to split Flac files into individual tracks, complete tag information and name the files, and used Sound Converter to change the files to MP3 (which plays on my car stereo). But it's a bit of a palaver.

Flacon will do all of the above in one step with a GUI. Nice! 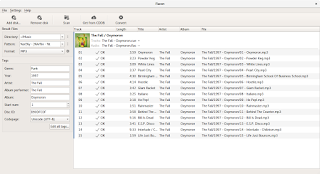 It is not available in the Debian repositories, but there is a repository at OpenSUSE Build Service (currently for Debian 8 & 9).

Posted by FreewheelinFrank at 5:03 AM No comments: Links to this post

How to Run Firefox on Wayland in Debian Buster

Debian Buster has an option to run Gnome on Wayland (a replacement for X*). As indeed did Stretch, but in Buster, it's possibly going to be the default.

I had assumed that, if I selected Wayland, all applications would use it, but apparently not. Applications that can't use Wayland can use a compatibility layer called XWayland.

It seems Firefox has had Wayland support since version 65, but the default is still for the program to use XWayland.

Thanks to a post on the Debian User Forums, I discovered I could launch Firefox on Wayland using this command:

Of course, if you have unpacked Firefox to a different location, use that location.

Firefox runs (with some weird error messages in the terminal:

But is it running on Wayland?

I found a suggestion to use Xeyes because, being based on X, Xeyes won't work on Wayland Windows. Indeed, the eyes follow the mouse cursor in the Firefox window when launched normally, but not with Wayland enabled. 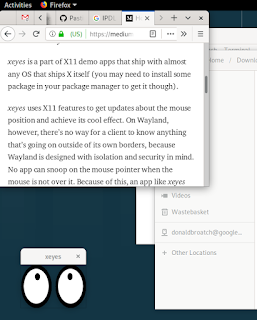 *What do you mean, that doesn't explain anything? Well, if you want the full explanation of what Wayland is, it's here.

Posted by FreewheelinFrank at 1:21 PM No comments: Links to this post

Things that are broken in Debian Buster

Bottom controls don't work in Videos (Totem) in Wayland in Buster. They work OK in Xorg. Clicking a video file will start the player, but it's not possible to interact with the progress bar, menu or volume buttons.

I'm not the first to notice this, and its not confined to Debian. The Antergos forum has a post on the issue.
Posted by FreewheelinFrank at 4:32 AM No comments: Links to this post

Is my computer up to it?

Firefox with a few tabs open: 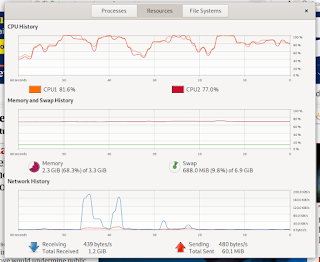 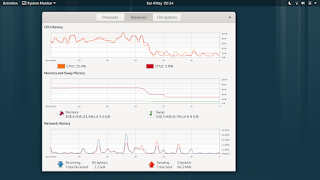 Well, that dropped off!
And open Chrome: 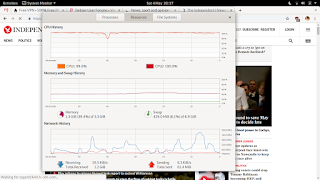 CPU maxed out! Ram a little lower.
And let it settle down with a few tabs open: 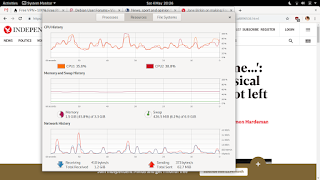 OK, so I need to get scientific and open Firefox and Chrome with the same tabs open, but it seems that I've found the reason why my installation of Debian Buster (Testing as of time of writing) runs slow.

Back in 2015 when I bought this laptop, many reviews complained of mouse pointer lag - in Windows. An update seemed to fix it, but today it's back to the same condition- laggy mouse,and slow to open programs.

To me it looks like the web browsers are the culprit.

Posted by FreewheelinFrank at 1:06 PM No comments: Links to this post

In over two years of using Debian Stretch, I only encountered one bug. It wasn't possible to cancel a print job from the Printers dialogue in Gnome.

I am happy to report it is possible to cancel a print job from the Printers dialogue in Gnome in Buster.

Here's hoping that Buster is as bug free. (Just to be clear, I'm testing the pre-release version, called, appropriately, Testing.) 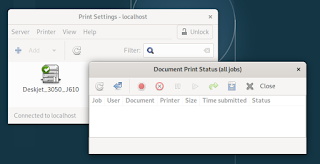 Posted by FreewheelinFrank at 8:48 AM No comments: Links to this post