Here are some more screen shots to illustrate identifying music files by use of an acoustic fingerprint, and adding tag information, using Music Brainz Picard.
I've added a folder containing 19 music files which are not tagged with meta-information- album, artist, track etc.- and used the scan button to have Music Brainz Picard check the acoustic fingerprints of the tracks against its database. The application has suggested four possible album matches:

The first suggestion is actually the album I'd ripped to MP3. 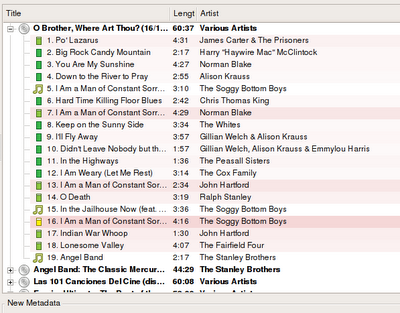 The complete green bars indicate a match with high confidence; the incomplete green bars a slightly less confident match, and the incomplete orange bar (track 16) a tentative match. (As we saw in the previous post, matches with low confidence are shown by a red bar.)
There are three tracks (5, 15 & 19) for which the application has not found a matching file. If we select this album and save, the corresponding files will not have their tag information added. We need to tell the application that three of our files in the added folder correspond with these tracks- we'll either find them in the unmatched files, or in the three other album suggestions.
In this case, my unidentified album was a soundtrack, which included tracks originally found on other albums, so it won't be surprising if Music Brainz Picard thinks they belong on another CD.
Here is our missing track 19, track 18 on another CD: we need to drag and drop it to track 19 on the first CD suggestion. 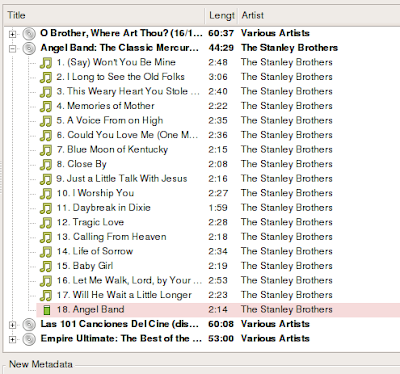 Here is our missing track 5: again we need to drag and drop it onto track 5 in the first CD suggestion. 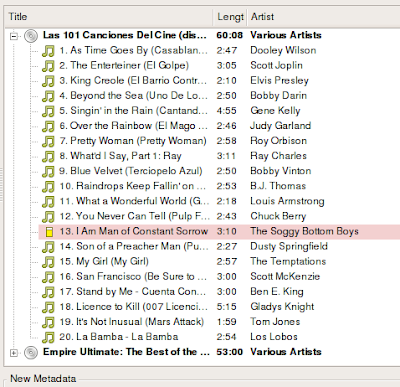 And here is our missing track 15: drag and drop to the first CD suggestion as before. 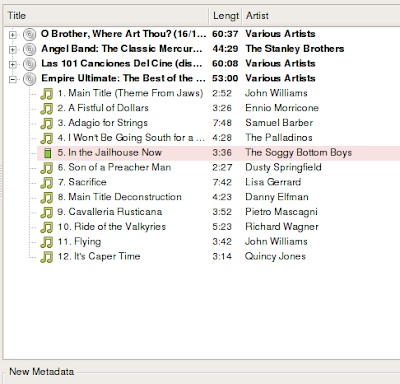 In this example, Music Brainz Picard had correctly identified all the tracks, but understandably not been able to tell which CD the tracks were from.
It's also possible to see the acoustic identification completely misidentify a track, it which case it's again necessary to manually drag the misidentified file to the correct CD suggestion, and drop it on the correct track number.
(If there is a way to tell Music Brainz Picard "this suggestion is the correct album, and all my files belong to that album, in the order that they appear as files in the folder", then I haven't found it. If anybody knows better, or can simply or clarify the instructions given, please leave a comment.
Update: Forgot to RTFM.

You can drag whole directories, multiple files or album clusters onto albums and Picard will attempt to match the dragged files to the album. Any track that doesn't match up well enough, will be added to an "Unmatched Files" sub-folder specific to that album. You can drag files out of this folder and into the right slots in the album to fix up the files that Picard couldn't get right.

Posted by FreewheelinFrank at 3:55 AM