Squeeze in a jam? 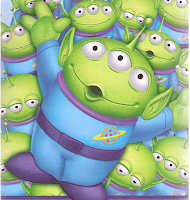 Debian Lenny is a great operating system. It just seems to be completely reliable- if there are any bugs, I haven't found them. That's why it's also known as the Debian Stable release. However, what's also obvious from the first time you use it is that a lot of the packages it contains are old. Only a few years old, but that's a long time in computing. This laptop, for example, has a moderately high performance graphics card, but Lenny just can't use it. The open source drivers available in Lenny can't make full use of it, and the proprietary driver is only installable by recompiling the kernel. In contrast, the proprietary graphics driver was available in PCLinuxOS four years ago, in Ubuntu soon after, and the open source drivers available in Ubuntu could make full use of the card soon after that- meaning I could run desktop effects and games. Not that I'm much of a gamer, or a big fan of desktop effects, but I liked the minimal Compiz effects available in Ubuntu- this is the 21st century: windows should minimise smoothly, not by drawing smaller and smaller black outlines- that's just so 90's.
The next version of Debian Stable- called Squeeze- is long overdue. What's holding it up? Squeeze will be released when the release-critical bugs are squashed. I'd assumed these bugs were performance bugs in software packages in Squeeze, but now I think that many of them could be upgrade bugs that will foul up any upgrade form Lenny to Squeeze.
When I first tried Debian, the video driver issue prompted me to try an upgrade to Testing- the version of Debian with more up to date packages, but a higher risk of finding bugs. The attempt left me with unusable computer. I put this down to being a complete noob, and reinstalled Lenny. Later I learnt that the upgrade has to be staged- certain packages have to be updated before doing a full upgrade, otherwise the upgrade falls down.
Recently I saw a post on the Debian forum which suggested that an upgrade was now a relatively simple process- involving just a kernel upgrade before a full upgrade, so I thought I'd give it a go.
Being less of a noob this time, the error messages I saw put me off, and I aborted the upgrade.

The following NEW packages will be installed: {snip}

The following packages will be upgraded: {snip}

The following packages are RECOMMENDED but will NOT be installed: {snip}

I don't really think I want to uninstall Gnome, so 'no' thanks.
I Googled the first 'unmet dependencies' issue and found this:

A pretty deep swamp to get out of? I think I'll give that a miss!
It seems to me that the other issues reported are upgrade bugs.
Now of course Squeeze is not ready yet. As a fresh install, it's only an alpha.
The absence of a release manager seems to be a factor in the delay. Lack of manpower is an issue mentioned on the Debian installer page above.

As most people will have noticed, this release has taken more time than usual. This was for various reasons that go from technical (major changes in the installer itself and other components that affect us) to lack of manpower to manage all the work required quickly. We really need more people to help us and contribute; please contact us if you're interested in helping.

It's frustrating waiting for Squeeze, but when it comes, I'm sure it will be a great release- so good luck to the Debian team in squashing those release-critical bugs!
Posted by FreewheelinFrank at 8:54 PM 1 comment:

A good computer desktop should be elegant, both in function and appearance. Gnome goes a long way towards satisfying those requirements for me, but in some ways, it's become a little dated both in functionality and appearance. As I've written about previously, the taskbar and the notification area date from 1995. (Application launchers are a more recent alternative to minimised windows in the taskbar, and the much-abused notification area is disappearing in Ubuntu.)
Now of course, both of these objections are going to be addresses in the radical overhaul of Gnome that is Gnome 3, which is also going to change the appearance of the Gnome desktop.
So really this post is already obsolete, because I'm going to write about the appearance of the Gnome desktop, but here I go anyway.
I've been trying out various Gnome themes. The default theme in Gnome in Fedora, Mandriva and Debian is 'Clearlooks', an elegant but somewhat dated theme. Now there's 'dated' as in simply, gone out of fashion, and there's dated, as in, there's something better available now. Think about the web- there are web sites done with tables and with clumsy menus and too many glassy buttons and animated gif's, and there are elegant and restrained web sites done with CSS, beautiful backgrounds and well laid out menus. No surprise to learn that Gnome 3 will use CSS in its design, giving theme designers wings.
Clearlooks is certainly a vast improvement over the way Gnome looks unthemed- as much '95 as the notification and taskbar. It's not the naff 90's web site of my analogy. I suspect that blue has gone out of fashion, for me at least, but is there anything better available? Is clearlooks the elegant contemporary CSS layout website?

Any possible improvements in appearance are slight, mostly due to the limitations of the GUI toolkit used by Gnome. A subtle shading of a border, maybe, or a slight glow or 3D effect to a button, a new slider design or some new icons for the window buttons. So no, clearlooks isn't the 'elegant contemporary CSS layout website' of my analogy either: we'll have to wait for Gnome 3 to see what designers can really do.
(One aspect of Gnome where designers already have free reign is in icon design. Sharp-eyed readers will also spot that I've changed my icon theme in some screenshots. Icon sets can look horribly dated or elegant and contemporary.)
So I'm looking for a new colour, with some subtle improvements in design.
For me, dark is the new black, so I'm going to be looking at dark themes. Now obviously Ubuntu has some beautiful dark themes, but I've been looking for alternatives, ones that will work on my Debian Lenny computer.
Dark themes can look good, but there are two issues that quickly become apparent: some applications do not respect the way themes tell them to display light text on a dark background, resulting in illegible menus, and a dark theme may look good on a dark wallpaper, but open a browser window or a document in OpenOffice, and the contrast can be a strain on the eyes.
One dark theme I've used for a long time is New Wave. It's elegant and easy on the eye. It avoids a harsh contrast with white browser or document pages by having toolbars in grey, so there is a gradient from the dark upper panel and menu bar. I've seen the greyness of New Wave criticised as dated, but I feel this is just fashion. Grey is easy on the eye, neutral, and leaves text easy to read. In fact, I make New Wave even more neutral on my desktop by using the Gnome-Colors Gnome-dust icon set. 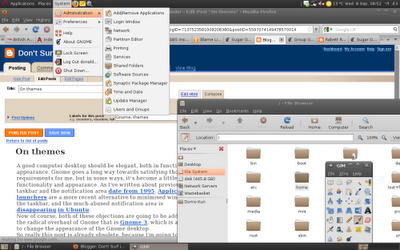 Over the past few days, I've been trying out quite a few themes from gnome-look.org. I've found two dark themes that work on Debian Lenny that I consider good enough to keep installed and use from time to time.

The first is Shiki-colors, which 'mixes the elegance of a dark theme with the usability of a light theme.' I suppose that's true of New Wave too, really. I've used the Shiki-Dust theme, the most neutral of the set- other variants are more colourful. The one thing I don't like about the theme is that drop-down menus are dark- I find these difficult to read, and prefer the grey of New Wave.
One problem using Shiki is that the Firefox search bar drop-down is almost unreadable using this theme- but there is a fix. Shiki-colors comes in two versions, with different engines- Clearlooks and Murrine. The former will run on Debian Lenny out of the box, the latter requires the installation of an updated Murrine engine (the one that comes with Lenny is too old). See below for details. 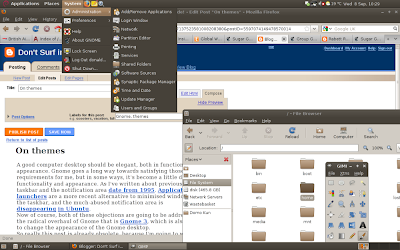 The second theme I've chosen is Sugar. This theme utilises the Murrine engine to apply some (very subtle) glassy looks. It won't work with Debian Lenny because the version of Murrine in Lenny is too old. There is a Debian package of an updated Murrine engine on gnome-looks- with that installed, I could use the Murrine version of Shiki-colors, and Sugar 1.0, but not Sugar 1.3. I'm guessing that depends on and even later update to Murrine, available in Ubuntu (which the theme is intended for).
However, even Sugar 1.0 is very nice. In the screenshot, I'm using it with the Elementary icon set.
[Update: this is corrected in version 1.3 of Sugar, but to install this version, Debian Lenny users will need to install libgtk2.0-0 from backports and compile an updated version of Murrine.]
On the plus side, it doesn't have dark drop down menu's, which suits me. 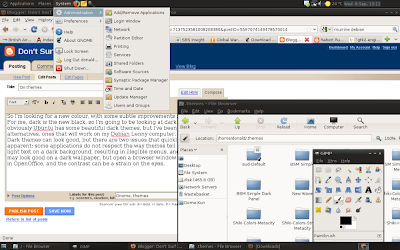 In summary, it's not only Ubuntu users who can have an elegant and contemporary Linux desktop (although they- and Debian Unstable users, of course- have the lead).
However, to see what the most talented designers can do with a modern desktop, wait for Gnome 3.
Posted by FreewheelinFrank at 12:54 PM No comments:

It was the the 25th anniversary of the discovery of fullerenes today and Google marked the occasion with an interactively rotatable fullerene C60 molecule as the second 'o' in their logo.
The animation was done by a large javascript on the Google homepage, which proved very CPU demanding for some users. Hardly surprising as the animation contains 60 points in 3D space, making up 12 pentagons and 20 hexagons with all the connecting lines involved.
Interestingly, Firefox seemed to struggle the most with the animation; Opera and Chrome handled it with less effort.

Posted by FreewheelinFrank at 1:53 PM No comments: