Debian comes with a rebranded version of Firefox called Iceweasel. The reasons for this are that the Firefox logo was copyright, and everything in Debian must be strictly free software- thus free to modify- and Debian maintains its own Firefox/Iceweasel package after Mozilla itself has stopped providing security updates for them. (Debian Lenny comes with Iceweasel 3.0- perfectly stable- which is the aim of Debian stable releases by definition- but old.)
Now Firefox has dropped the restrictions that were an obstacle to the use of its logo by Debian, and there is hope that the other issues may be worked out to allow Firefox back to Debian, I discover on the Debian Forum.
I have to admit that I'd already dropped Iceweasel for original Firefox, which I installed according to the instructions on DeviceGuru. I'd got used to using Firefox 3.6, and couldn't get used to using a rebranded Firefox 3.0. (A more up-to-date Iceweasel, 3.5, is available from Debian Backports, but I only discovered that after dropping Iceweasel.)
Firefox installed in this way has to be updated manually after starting Firefox as root. Another slight disadvantage is that browser plugins for Iceweasel don't work with Firefox (Totem 2.22.2 plugin is too old?) The way round this is to tell Firefox to open content such as MPEG video in Totem rather than with the broswer plugin. (This is also true for Opera and Chrome. They will see the browser plugin but it won't work. Either disable the plugin- Chrome- or tell the browser to use Totem- Opera.)
[UPDATE: A comment suggests using the mozilla-mplayer plugin instead of the Totem plugin.]
(The instructions for installing Firefox can also be modified to install Thunderbird, which is replaced by a rebranded version in Debian for the same reasons.)
I tend to agree with this quote from the Debian Forum:

I think this would be great. Not because Firefox is "better" than Iceweasel or whatever, but because this was always an unfortunate nitpicky battle that to my mind made FOSS look somewhat silly to outsiders. The whole thing became a lightning rod for extreme positions, and people just beat each other over it.

I would love to see Debian and Mozilla work this out.

UPDATE: A comment suggests that Firefox will update itself, but this doesn't seem to be true. As far as I can see, my original post is correct, and you have to update as root. 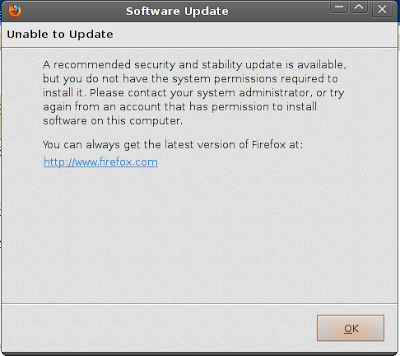 Posted by FreewheelinFrank at 9:42 AM